Mitsubishi has sold more PHEV SUV’s than anyone in the world?It is true and might be hard to believe based on Mitsubishi’s reputation in the USA in recent years. Once upon a time, I was hoping to own a Mitsubishi Montero 4×4. Then came the Mitsubishi Evo, considered the bargain supercar with unmatched AWD street grip.And then this giant world-wide manufacturer starting exporting fewer, less interesting cars and SUV’s to the U.S. The whole lineup became a bargain basement brand, and quality suffered as well. 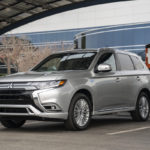 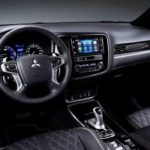 However, Mitsubishi Outlander has remained a popular SUV with lots of standard equipment and a good value. Then Mitsubishi engineered one of the first Plug-in Hybrid Electric Vehicles for Asian markets,before bringing it to America. The Mitsubishi Outlander PHEV has become the world’s best-selling plug-in hybrid electric vehicle of any category. Also, it has won several awards, i.e.Green Car Journal’s 2019 Green SUV of the Yearand the2020 Family Green Car of the Year™ the current year.

I had the chance to drive one of the first production 2020 Mitsubishi Outlander PHEV SUV’s in the fleet- thanks to one of the executives. That week actually led me tochange my mind about the Outlander. This PHEV reminded me of the simple charm of the Montero from years ago, but with a whole new innovative drivetrain.

The newest interior and dash layoutaremore appealing than past designs but still is not elegant. There are plenty of cubbies upfront for stuff for all seven passengers. The Outlander is available in 5 or 7-passenger seating [2 small people in the 3rd row] like most crossovers this size. Thankfully, there is more soft material and less plastic where people touch things. Yet, the cabin is still not too opulent.

The beauty lies in the proficiency of the Outlander, offering more economy and more reliability. In fact, the Mitsubishi Outlander outshines the competition with more efficient ownership and operation- leaving it in a category all its own. This is not a luxury crossover, but it is comfortable enough for most families on a budget. More hybrid and all-electric crossovers are coming to market in North America, but few are this affordable.

Currently, Mitsubishi has the only PHEV SUV with a 10-year, 100,000-mile powertrain warrantyon all PHEV components and the “Main Drive” Lithium-ion battery. It also has a 5-year, 60,000 bumper-to-bumper warranty, and both are fully transferable. They are looking to underwrite this vehicle to stay in the U.S. market. Now with new partner corporations, Mitsubishi is announcing new products to increase its presence in North America.

The 2020 model gets some really nice improvements, including a much-needed eight-inch, second-generation Smartphone-link Display Audio (SDA) system which worked well. This also allows for better graphics and standard Apple CarPlay™ and Android Auto™. The HVAC controls are relocated so both front seat occupants can stayin control of the temps. The seats are more supportive, with standard power-adjustable lumbar support and better cushions for the rear seats.The second-row seats are still erect but doreceive some road trip extras like USB charging ports(SEL trim).

Our loaded GT also includedthenew Premium Interior package with attractive diamond-quilted leather seats. Being a company that has produced high-quality sound systems for decades, Mitsubishi has engineered its own Power Sound System (MPSS). The sound is a vast improvement; however, give us a volume knob again! Although now quieter inside the cabin, there could be a bit more sound insolation to deal with road noise and drivetrain hum.

The GT model also gets nice amenities such as LED headlights, automaticcruise control, and a better backup camera. Mitsubishi also uses the battery pack power through two 120-volt outlets to run extra electronics.There is still a small old-schooltailgate for tailgate parties or camping, where the second outletis located. Be sure to bring the air compressor, or you might be the one blowing up the air mattresses.

My only real complaint of the 2020 Mitsubishi Outlander PHEV is the firm ride. The stylish 18” wheels with P225/55 R18 tires need a more compliant suspension. Engineers were attempting to keep the body roll to a minimum with an SUV weighing in over 4,200 lbs. But they have sacrificed some of the family-wagon comforts in favor of stiffer handling in the corners. The handling is not dynamic; however, traction and safe handling is not a problem.

The best standard safety advantage to the Outlander is the excellent visibility out the side and rear. The boxy/wagon shape does not drastically slope up in the rear, leaving the larger third and rear windows for better sightlines for all. Again, the look is more utilitarian, because the design is for efficietntspace and focused on the driver and passenger view and safety.

The 2020 Mitsubishi Outlander PHEV has kept this Japanese company in the market and offers an alternative clean-energy family vehicle for the carpool lanes of America. With technology at the forefront and a sophisticated powertrain, the Outlander is worth a closer as a family-friendly people and cargo mover with lots of owner benefits. Forthose who live in the snow-belt of our country, the PHEV system with “Twin Electric Motor All-Wheel Control” will pull you right along after a snowfall and an over-night charge.